Burnham Park and the Association

Burnham Park was donated to the Town of Morristown by the visionary Frederick and Catherine Burnham in 1911 to provide passive open space for the enjoyment of those who did not have large tracts of land themselves and to provide a natural woodland space for the relaxation of the public. They made their intent very clear and even included a reverter clause in their deed whereby the Burnham heirs could reclaim the park if the conditions and spirit of the deed were not honored by the Town.

The BPA is a nonprofit, grassroots all volunteer organization founded in 1948, incorporated 1973, drawing members from both Town and Township. It serves as the steward of Burnham Park, but is also dedicated to preserving / protecting environmentally sensitive lands, viewsheds, critical natural resources, and historic sites.

​I became involved in 1979 and felt keenly that the abuses and degradations of public parks and open spaces in our area should be stopped and remediated. I had learned that, in 1976, an entire grove of oak trees was cut down in the park to make room for extra parking and a proposed expansion of athletic facilities, despite the deed restrictions on the land. In the early 1980s, the wetlands in BP were being used as a dump site for construction debris from the building of the Ann St. garage, with 85 dump truck loads worth of broken glass, ceramic pipe, rusted wire and toxic materials piled throughout the area. The bridge over the spillway was collapsing, the playground equipment featured broken swings and rusty climbing gyms, the gazebo roofs had holes, the vegetation on the island in the bigger lake had withered, the stone retaining walls around the larger lake were crumbling and the entire park was derelict, frequently utilized by drug addicts and avoided by families.

The disregard for the value of this generous gift of public land, not to mention for the safety and welfare of the area’s residents, made me angry and galvanized my personal desire to mobilize and educate the community to become active stewards of this land and protectors of these resources. 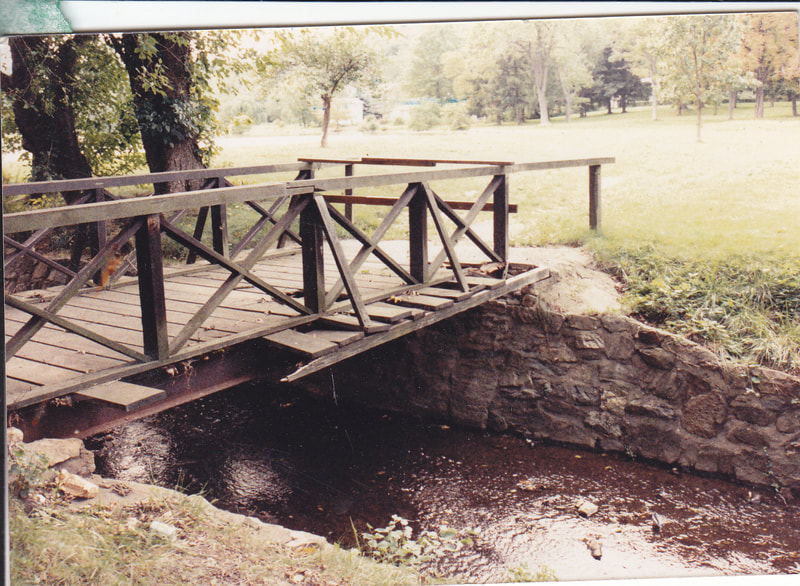 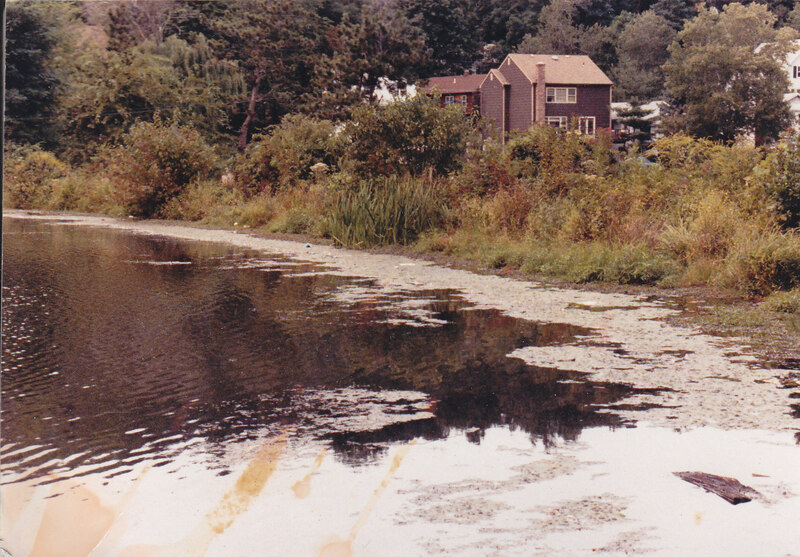 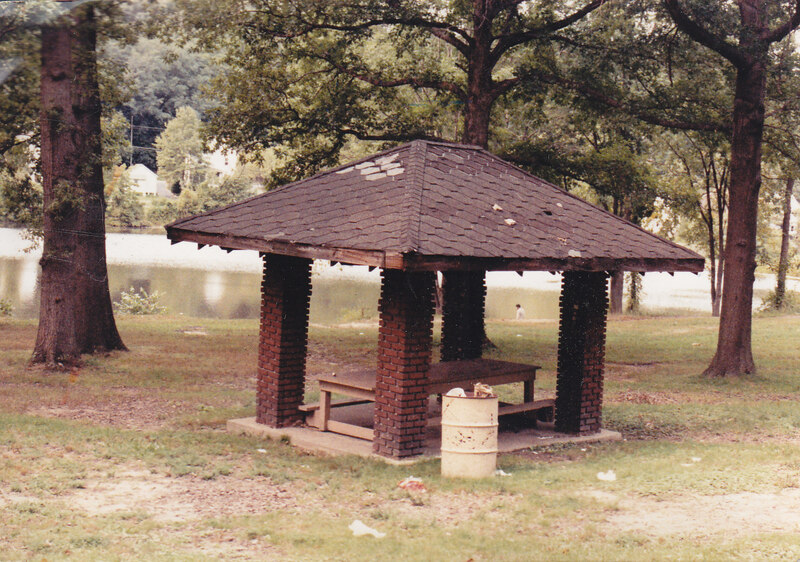 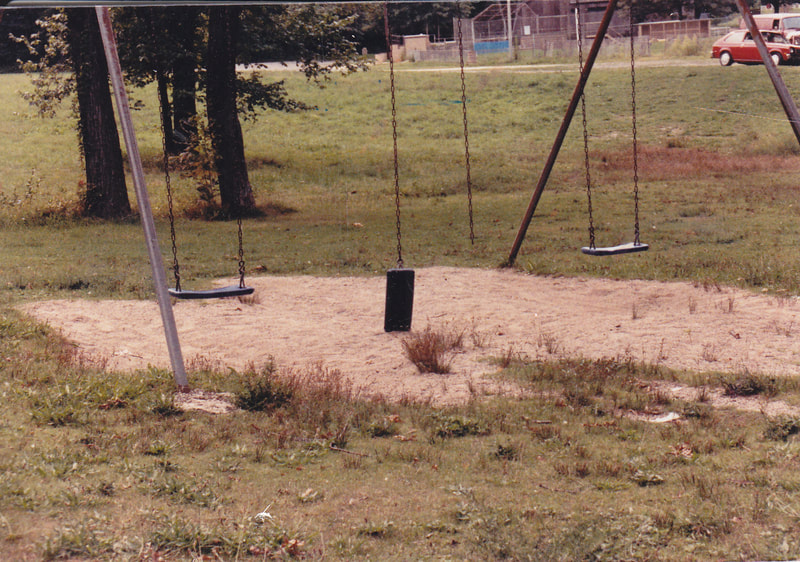 BPA began by lobbying the Town to remove the dump and procuring a landscape architect’s plan to beautify the park. We helped the Town secure a block grant to remove the crumbling stone embankment and replace it with landings, and to grade the land surrounding the pond. We contacted the Burnham Family to reinforce our standing with the Town as we undertook a massive planting effort to restore the natural beauty of the park, and we went through some interesting experiences procuring trees, shrubs and other vegetation for the first of what is now over 30 continuous Arbor Days!

Recognized by the Board of Chosen Freeholders "for focusing the public's attention on the importance of trees to our environment, for planting and preserving trees in the community, and for its ongoing commitment to improving and maintaining an exceptional landscape," the BPA has installed over 3,600 plantings in Burnham Park in over 30 annual Arbor Days and, among other things, successfully fought 25 years of battles to preserve nearly 200 acres of environmentally sensitive lands in Jones Woods and the Washington Valley. Our efforts in Burnham Park received international recognition when BPA was one of only five organizations in the world – and the only grassroots one - to win the prestigious National Arbor Day Foundation Project Award in 2005 (other winners that year included the International Olympic Committee and organizations of similar stature).

​In 2000, we collaborated with the Whippany River Watershed Action Committee, OMNI Environmental, the NJ Land Conservancy and the Town of Morristown in the first of several years’ installation and ongoing monitoring of the Riparian Buffer Zone around the lower lake in Burnham Park. 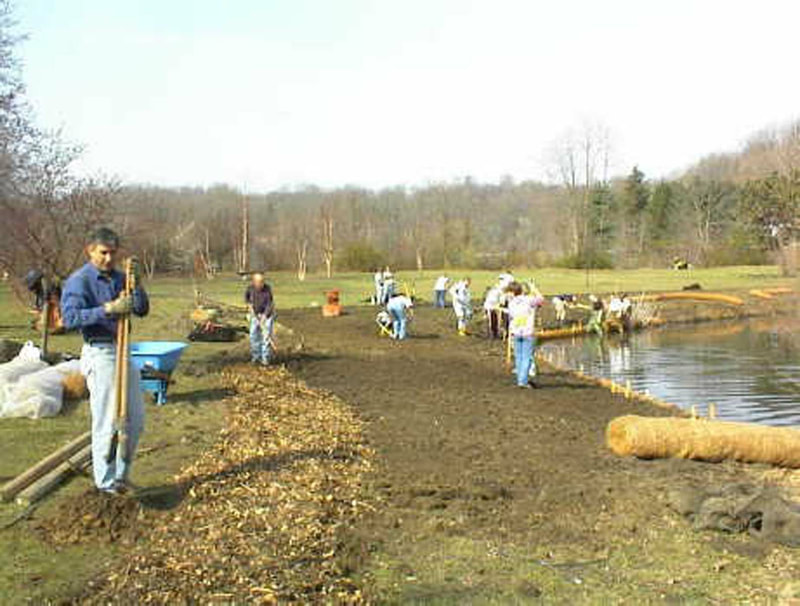 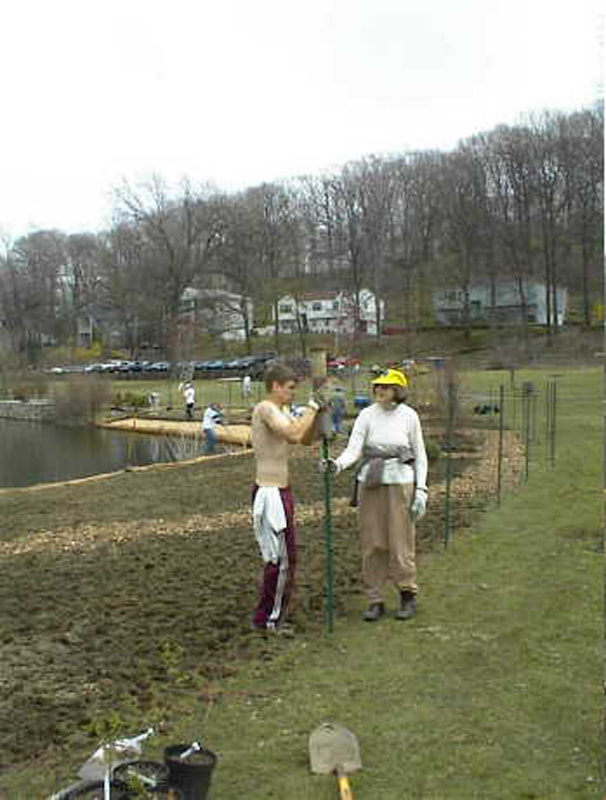 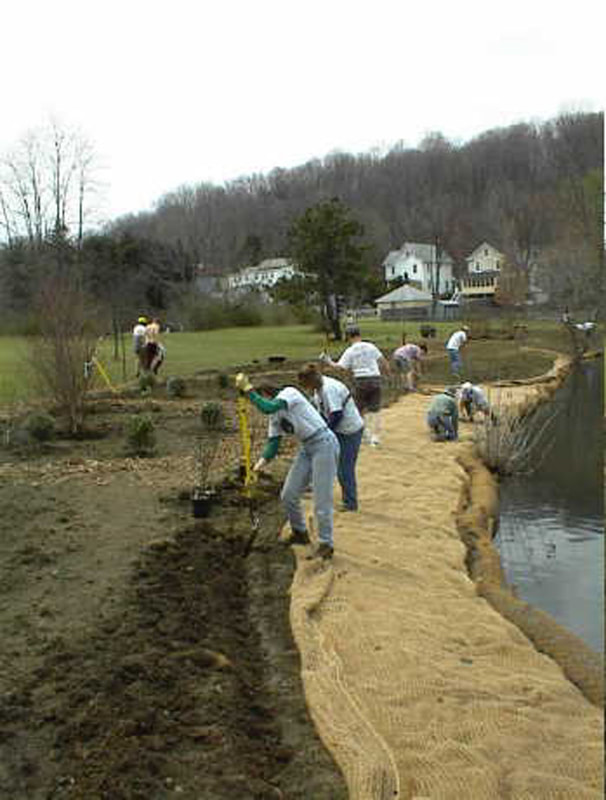 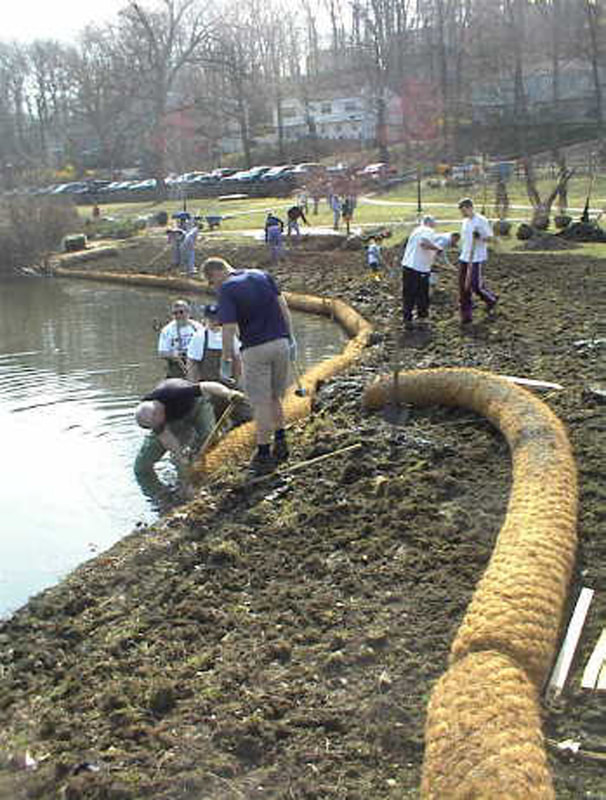 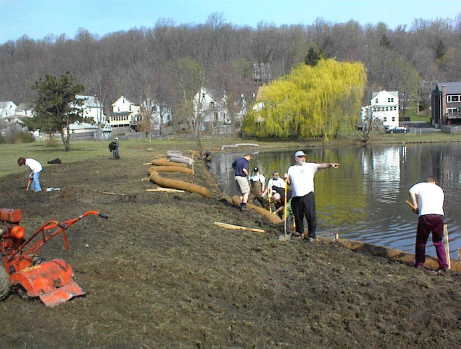 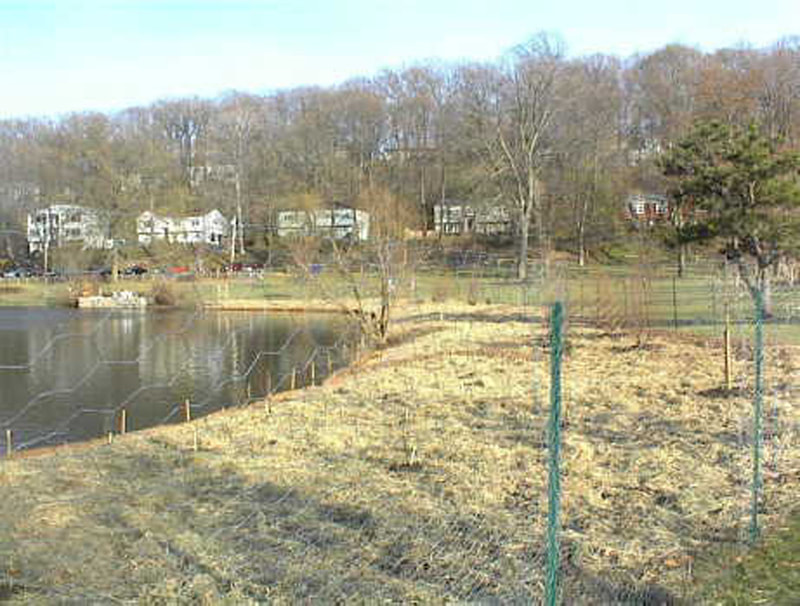 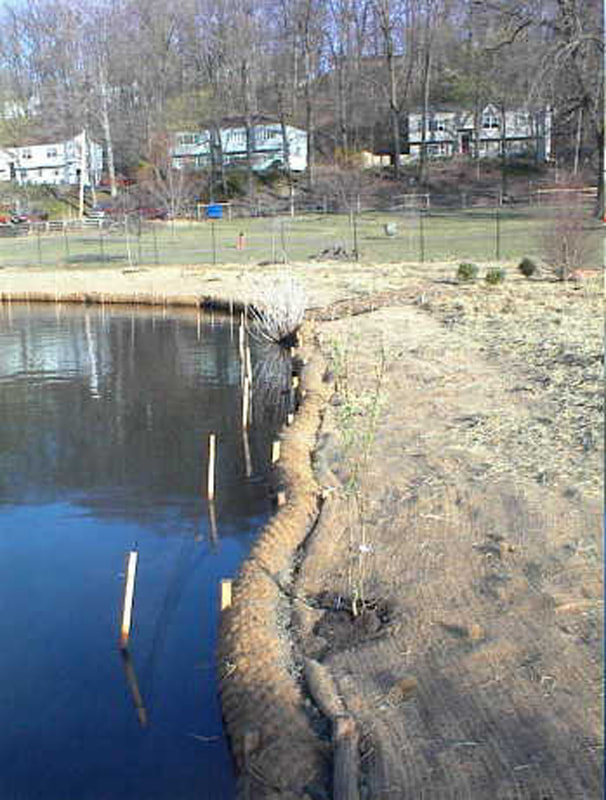 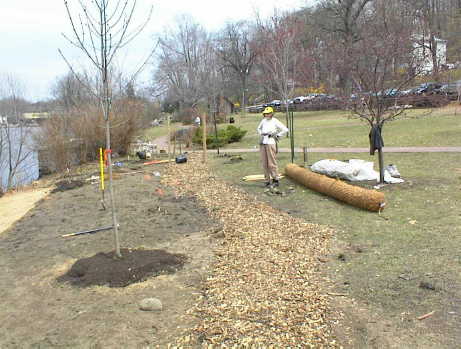 Since then we have continued to monitor, plant and repair. 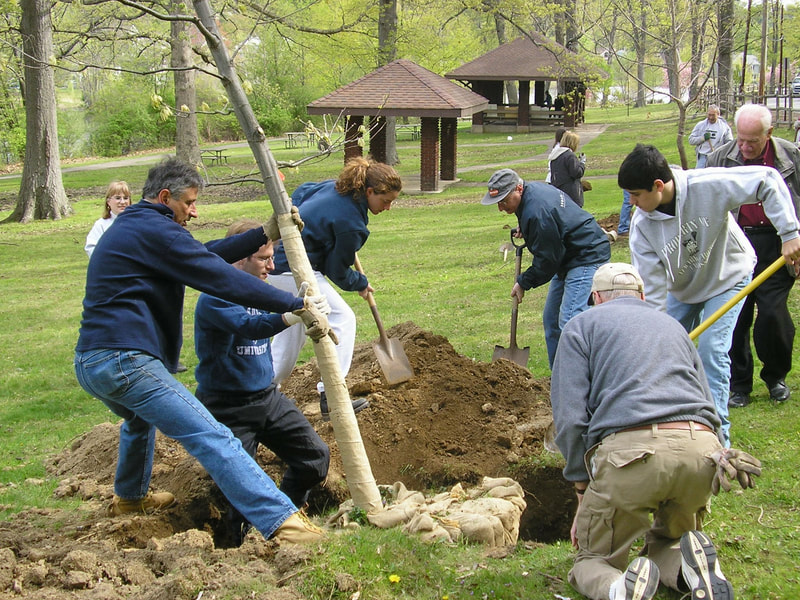 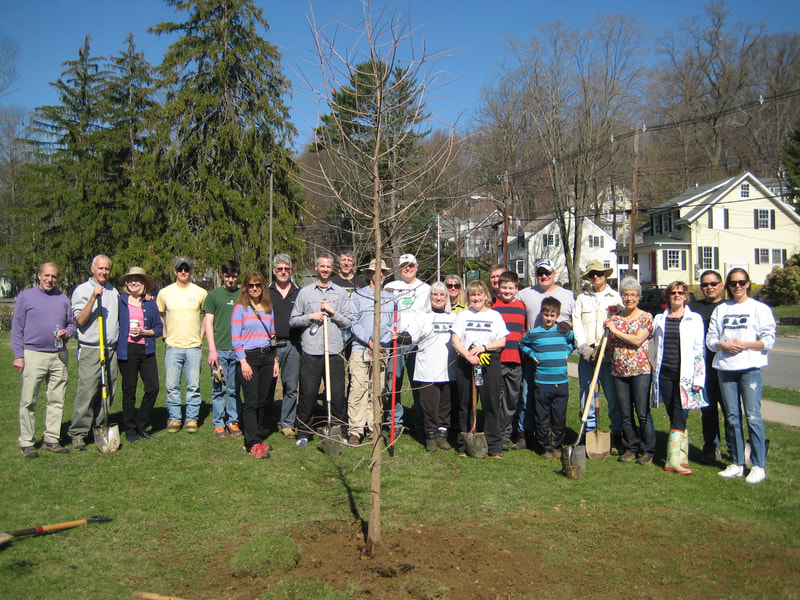 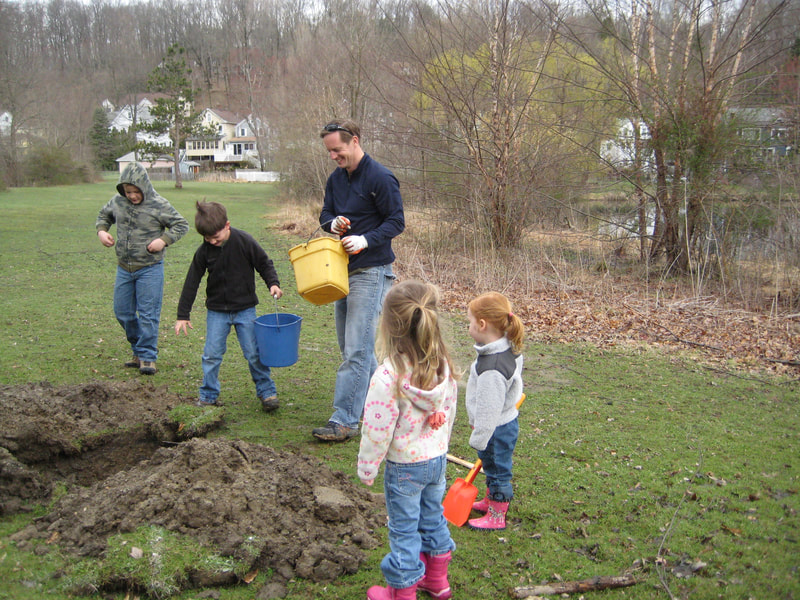 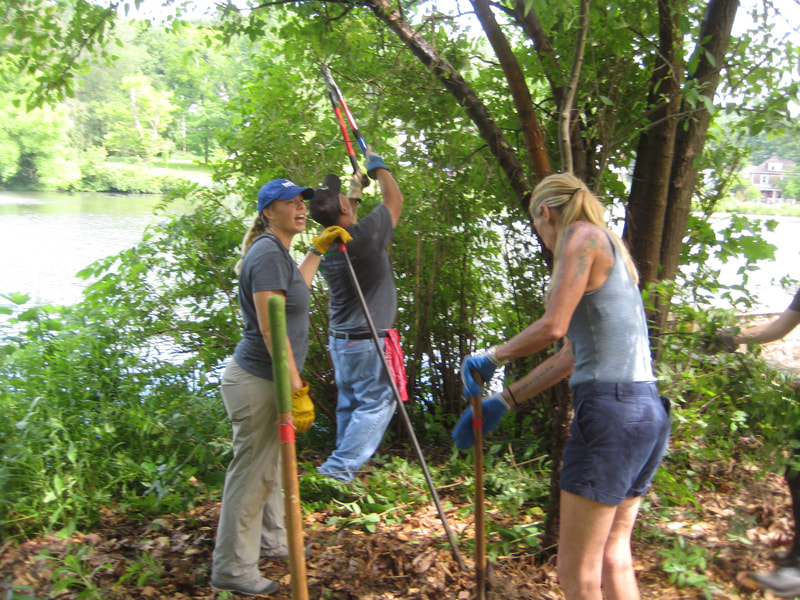 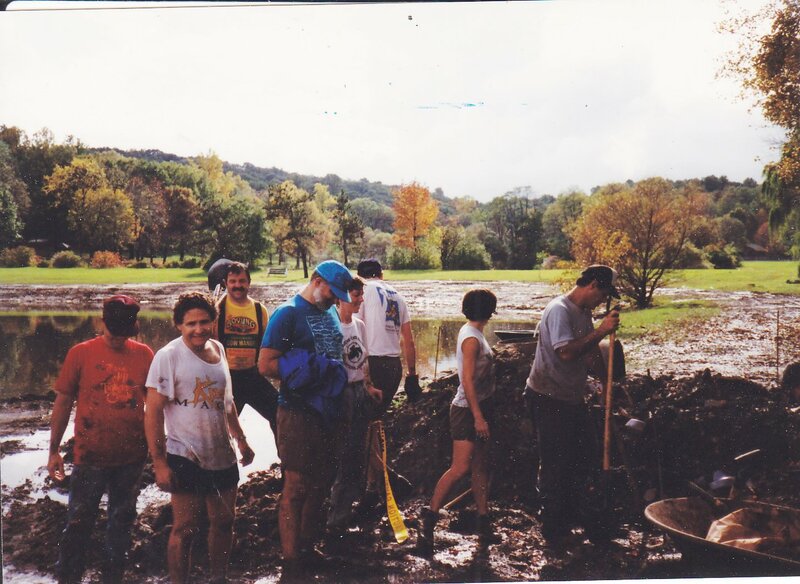 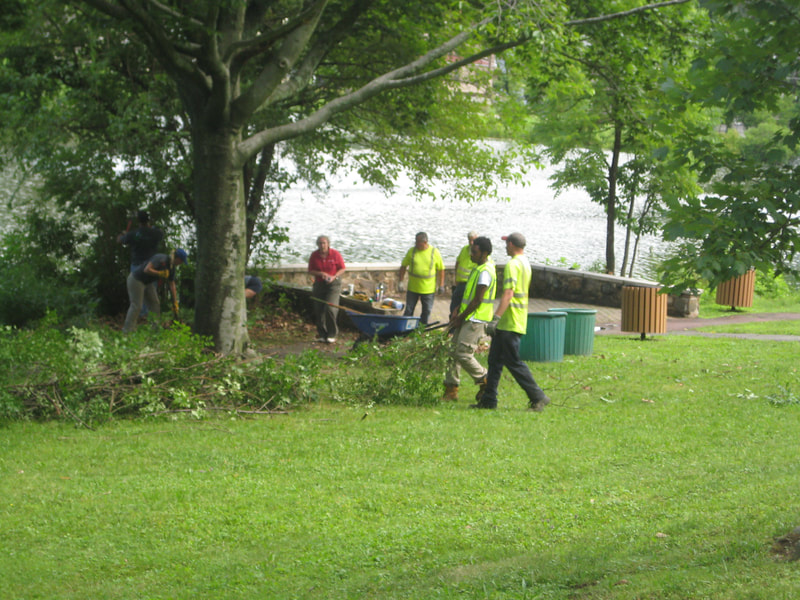 And this is what the riparian buffer zone looks like today. 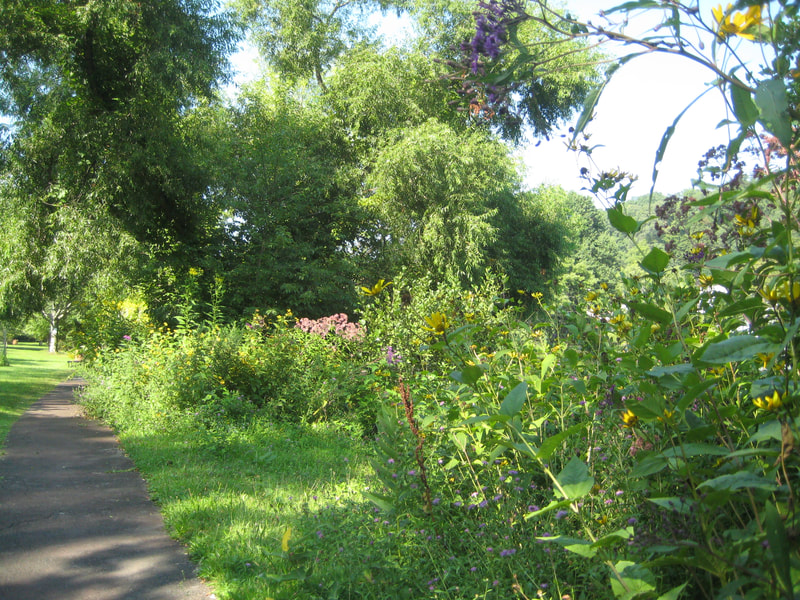 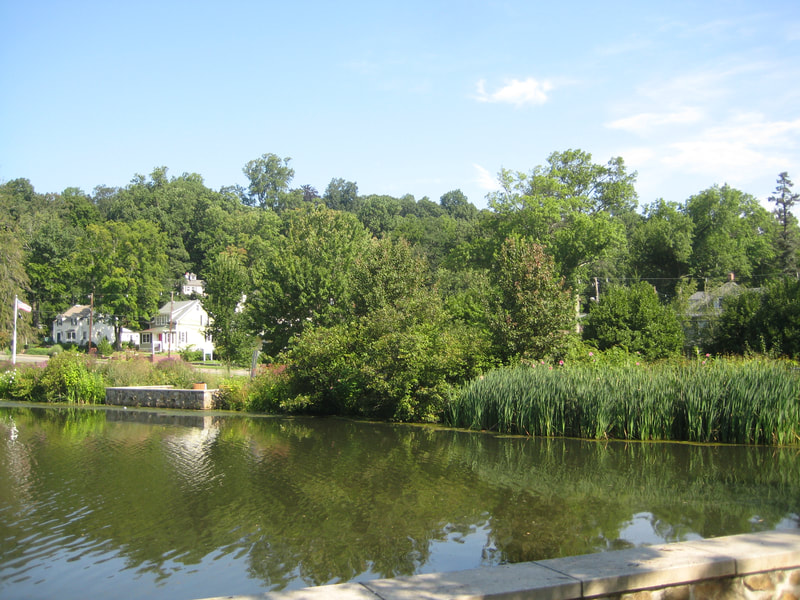 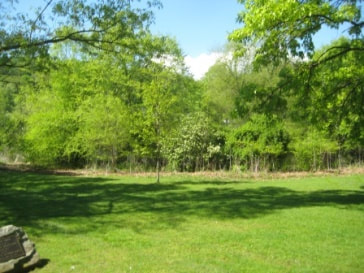 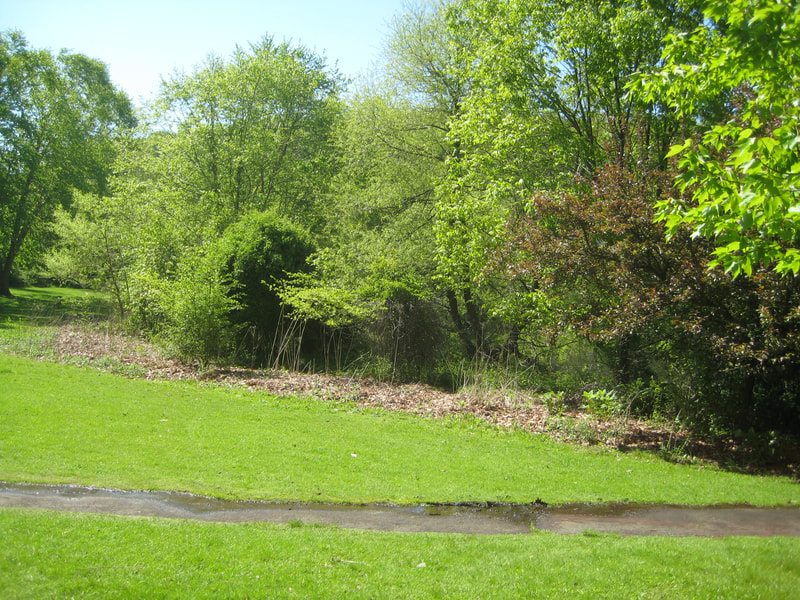 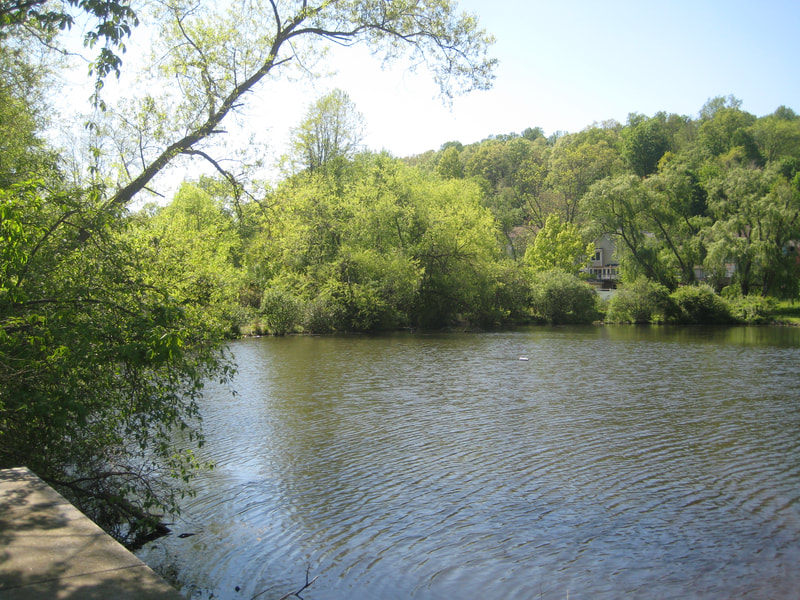 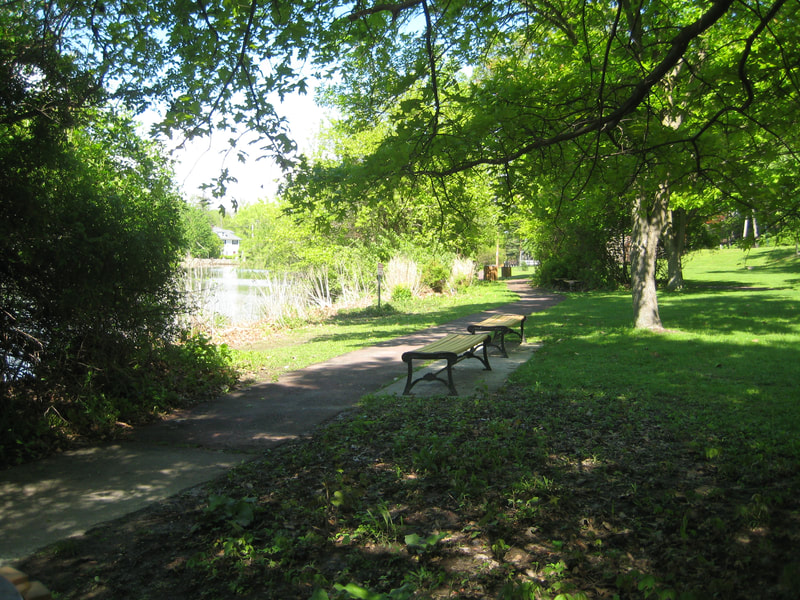 To promote stewardship further, we hosted several rainbarrel workshops in collaboration with Rutgers’ Pat Rector and ARTS by the People. 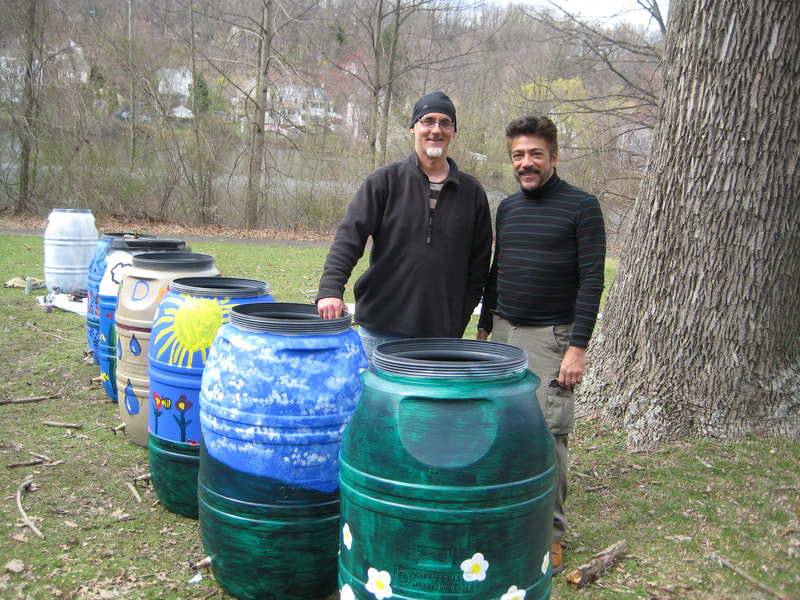 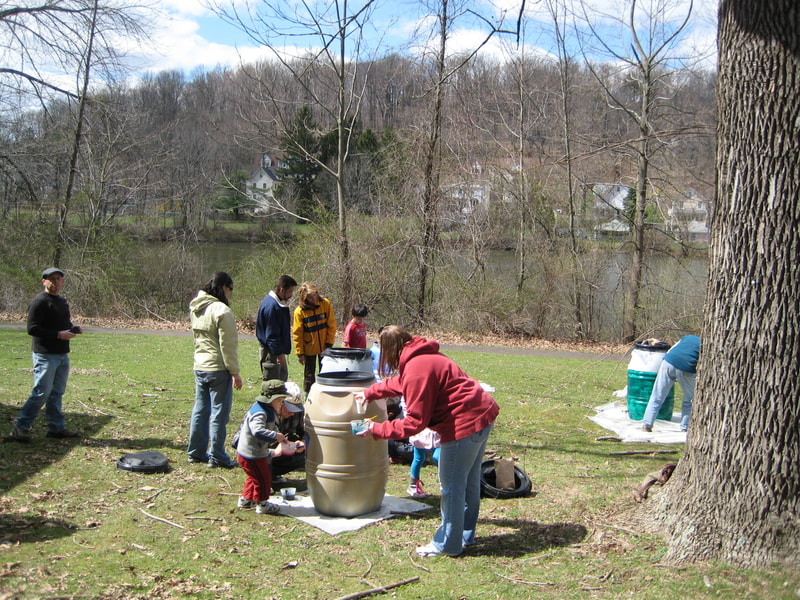 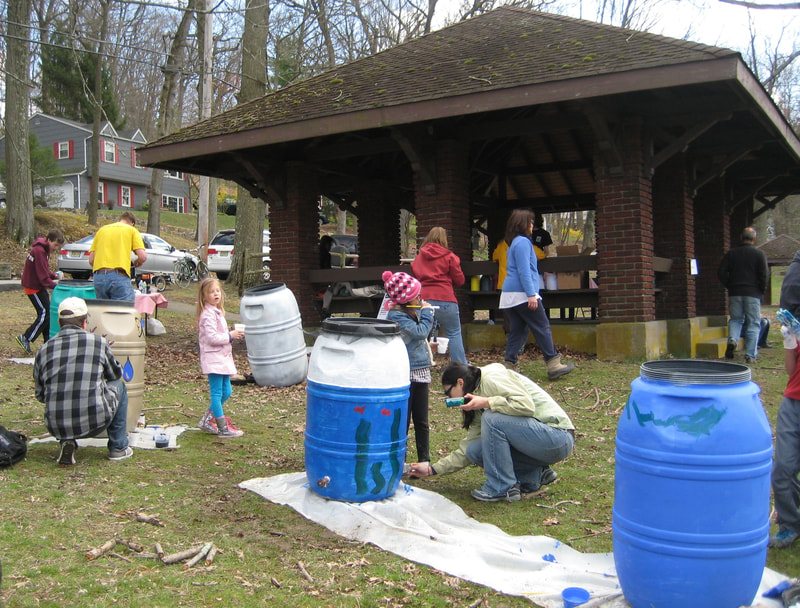 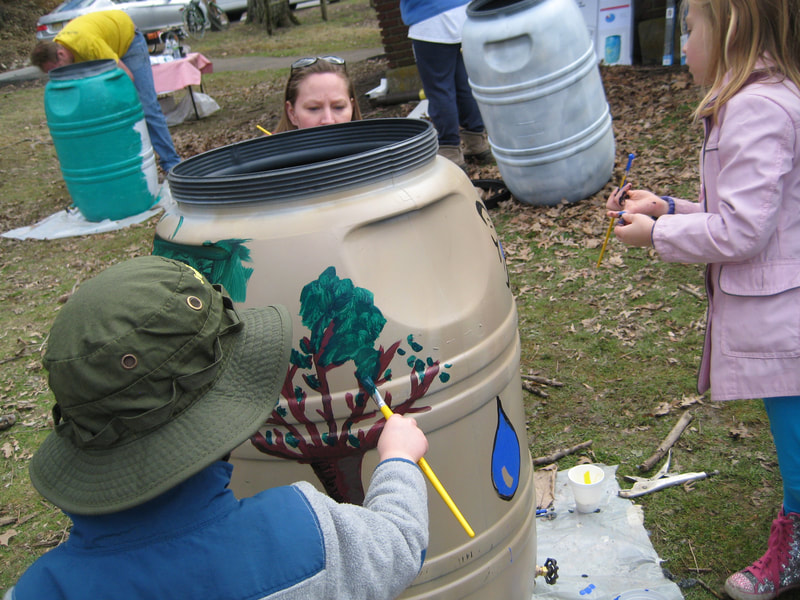 ​We’ve also worked with the nearby Alexander Hamilton Neighborhood Association, GeesePeace, the Town of Morristown and the Humane Society, we undertook training and formal registration to pursue active goose control in Burnham Park through “addling” and site aversion techniques. In 2017, there were 14 nests (of which 5 were abandoned), 73 eggs replaced, 12 hours logged. In past years, thanks to the efforts of these dedicated people, only 2 goslings hatched out of the more than 100 eggs laid by resident geese. This team spent many hours at this arduous task, carefully monitoring each nest, and tracking the progress of the seasonal activities of the geese. The aim is to encourage the geese to return to their original migration pattern.

I have always been inspired by the words of Frederick and Catherine Burnham which still resonates 106 years after their gift of Burnham Park to the Town of Morristown:

"For some three or four years Mrs. Burnham and myself have been discussing the plan of giving a piece of ground… for a Public Park. In our judgment this should be situated so near the green as to be within easy walking distance of the residences of our town, especially of those which have not much land surrounding them.

Our idea has been that this ground should be used not as a playground for the benefit of noisy ball games or such other games as are attended by noise and uproar, but rather as a place where tired families can, during the spring, summer and autumn days, obtain that refreshment which is only obtainable apart from the noise and [con]fusion of a crowd.

We have thought that such a piece of ground should contain twenty-five or thirty acres available for walks, resting places, with cool spring water, ponds and streams … with fine trees under whose wide spreading branches mothers could take their children and find the rest and enjoyment which such a park would afford..."

Imagine the vision, the foresight and generosity to think of providing open space for the common good – back in 1911! How, then, can we not be stewards of this park (and other natural resources)?

There is a deliberate wild section to the park which includes extensive wetlands and helps maintain the "natural state" sought by the Burnhams. The cultivated portion of the park includes walking paths, landings where people can fish, benches, the playground, gazebos, etc.

The Town of Morristown's Department of Public Works, in conjunction with the Town's Shade Tree Commission, the Town Arborist and the Engineering Department, oversees the physical maintenance of the park. The Town is currently putting together a Master Plan for Burnham Park to be issued in 2021. The BPA has been working with these agencies to improve the condition of the pathways and the landings and to combat the infestation of the emerald ash borer. The BPA has also worked with the Whippany River Watershed Action Committee to maintain and improve the Riparian Buffer Zone, a proven strategy to reduce the goose population in conjunction with very effective addling efforts (cutouts of dogs and swans have not worked). The BPA also monitors the aerators in the pond and notifies the Town on issues affecting their deployment (silt clogging, electrical failures, etc.).

The Association meets monthly. We invite anyone interested to attend and to volunteer with our current efforts or new ones you might propose. We welcome participants on Arbor Day and Green Strip cleanup efforts, goose addling, hiking trail maintenance, invasives removal and more. We invite you to walk the trails, attend events such as Movie Night in the Park, and take part in our ongoing Scavenger Hunt! PLEASE JOIN US!
​
Dr. Lynn L. Siebert
President of the Burnham Park Association